The earliest multilayered organic light-emitting diodes (OLEDs) were reported by Tang and Van Slyke in 1987 and were based on a bilayer architecture1. Since then, OLEDs have drawn tremendous attention during the past decades because of their po-tential applications in solid-state lightings and flat-panel displays.
OLEDs are characterized by low driving voltage, high brightness, full-color emis-sion, rapid response, and easy fabrication of potentially large-area, flexible thin-film devices. Recently, organic light-emitting diodes (OLEDs) have been successfully devel-oped and have now entered the commercial marketplace; however the general meth-od for fabricating organic light-emitting diodes (OLEDs) is vapor deposition under vacuum, which has critical drawbacks most notably the pixilation using evaporation masks limit its scalability and resolution. Other limitations include low use of the ex-pensive OLED materials (~20%), and high manufacturing costs. Despite these limita-tions OLEDs do have some advantages over thermal evaporation processing because of its low-cost and large area manufacturability2,3 and have attractive use in solution processing, such as spin-coating, inkjet-printing, blade coating and screen printing. 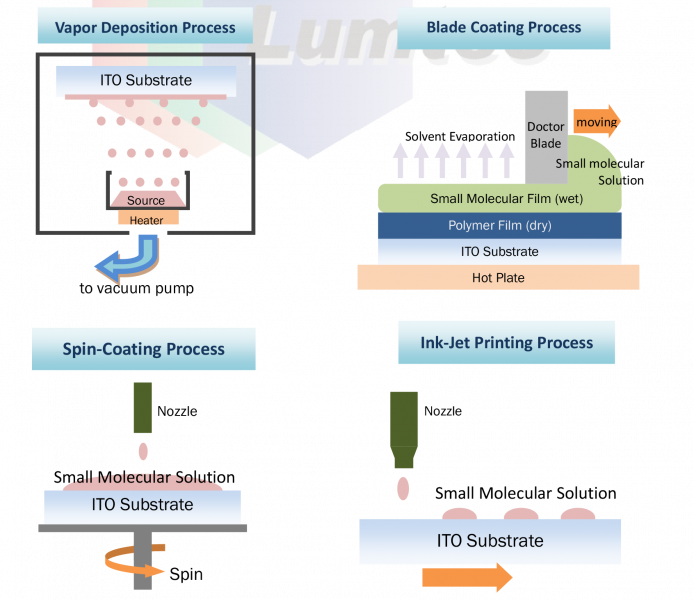 In the past decades, numerous efforts have been focused on the synthesis of new materials which have been developed for solution-processed OLEDs. Among them are light-emitting polymer and dendrimers. Light-emitting polymers are considered to be suitable for solution-processed, although their performances are lower than vacuum deposited small molecules, and there are some intrinsic difficulties such as the control of batch-to-batch variations and the purification of the polymeric materials. Further-more, dendrimers are another important class of macromolecule since they were also successfully developed and used in solution-processed OLEDs5,6.
One of the most challenging tasks in fabricating multilayer solution-processed OLEDs is to avoid the interfacial mixing between different layers because most of the emissive and charge-transporting materials are soluble in common organic solvents. Extensive efforts have been invested in developing novel crosslinkable materials, after thermo- or photo-crosslinking, all these crosslinked layers possess very good solvent resistance which greatly facilitates the subsequent processing of the emitting layer. By taking advantage of these materials, high efficiency OLEDs have been realized7.

If you want to check inquiry list, you can pressLink to check，Thank you!